“Uppalawanna” a modern Theri Gatha directed by Prof. Sunil Ariyaratne and produced by Dr (Mrs) Milina Sumathipala in 2007 won 04 sarasavi awards and 04 Signis awards. By popular request, this film was screened at the International Buddhist Film Festival in London in May 2009, and at the 2nd Asian Buddhist Film Festival in Singapore in May 2011 where it was cited as “an excellent film, demonstrating the demands of nun hood in Sri Lanka and the dilemma the young nun faces when having to react to an injured murderer, revealing much about the practices of Buddhism in Sri Lanka and is a moving human story” 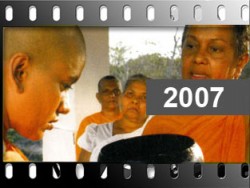 Upuli born to an aristocratic physician father and a respectable mother later became Uppalavanna. It was the ’89 terror era. Though she bore the identical name, of a well-known Buddhist Nun of yore the path of each was so different. For Upuli life was different, She fell in love with a low caste dancing teacher. She left her parents and got married. Her happiness did not last long. Bearing up her troubles the determined Upuli sought solace in a distant forest hermitage where she donned the yellow robe and became Uppalavanna. When she confronts a severely wounded rebel, she realized she had to make a hard decision – whether to treat him and look after him or abandon him. She made the decisive choice. With her decision began the second phase of her religious life facing the realities of our cruel society.