Our founder’s passion for arts, urged him to enter the field of film production in 1974, with the film titled “Unnath Dahai – Malath Dahai” (I Will Win – Come What May) which was an impressive box office success, studded with a galaxy of top notch stars of the day. 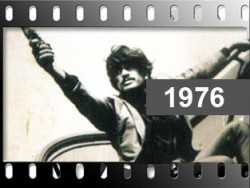 Sunil, while in a prison cell thinks about his past life. He recollects how he went on a pleasure trip with his sister Nadeeka, another Young girl named Karuna and his friend Sarath Meedeniya, while Sunil was at the university. During the trip, Sarath saves Karuna from Sunil’s harassments. This makes Sunil resent Sarath. A love affair develop between Sarath and Nadeeka. Hearing about the harassments, his daughter Karuna had to suffer at the hands of Sunil, Karuna’s father dies. Orphaned Karuna is given shelter by Sarath’s Parents. After leaving the Univerity Sarath becomes an Assistant Superintendent of Police. Sunil starts a night club, with the money he extorts from his father. He begins to earn money in an unlawful manner as well. Sarath is put in charge of the investigation into the illicit activities of Sunil. Sarath sends another University mate of his, to investigate what is going on at Sunil’s Club. In the meantime, Sunil plots to steal a parcel of gems that is being sent by train. Sarath makes arrangements to thwart Sunil’s plans. To take revenge from Sarath, Sunil deploys his men to kidnap Karuna and Nadeeka. They are rescued through Sarath’s efforts. Sunil admits his guilt and surrenders to the Police, Karuna promises to await Sunil’s release from prison.