“Ganga Addara” (River’s Brink) directed by Mrs. Sumithira Peiris, was jointly produced by late U W Sumathipala and his Wife Dr (Mrs) Milina Sumathipala, was the biggest box office hit of the ’80s. The film won a total of 21 “Janadhipathi” & “Sarasavi” National awards when it was first released in 1980. It was the winner of the highest number of awards that year, including OCIC Merit Awards. “Ganga Addara” is considered a milestone in Sinhala cinema as it has a string of “firsts” to its credit 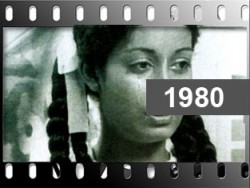 Nirmala is a daughter of a Sri Lankan middle class father whose ambition is to climb the higher levels of society. Her parents are keen to get her married to a young man from an aristocratic family in the higher reaches of society. The conflict between the limitless ambitions of her parents and her own attitude to love and romance, drives her to insanity. Her mental disorder is an enigma even to her doctors. But Dr. Sarath, resorts to a therapeutic device to aid her recovery. Nirmala comes back to her normal senses after she is attacked by an insane woman at the hospital. The parents take away their daughter after she has recovered. One day Nirmala overhears her parents saying that Ranjith her childhood lover engaged to marry another girl. He will not like to marry an insane girl. To Nirmala life becomes bitter and oppressive. She walks to the brink of the river- the site where she played about joyfully with Ranjith. She sees as if Ranjith is coming towards her in a boat. She steps off the plank, not knowing what she is doing and falls into the river.