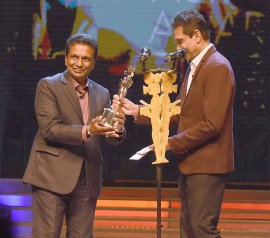 “Paththini” movie has won the award for Blockbuster Movie of the Year 2016 at the Fifth Derana Sunsilk Film Awards – 2017, which was held on 06th October 2017 at the Nelum Pokuna (Lotus Pond) Theatre in Colombo.

The producer of the movie, Mr. Jagath Sumathipala who is also the Director of Sumathi Group of Companies has received the award